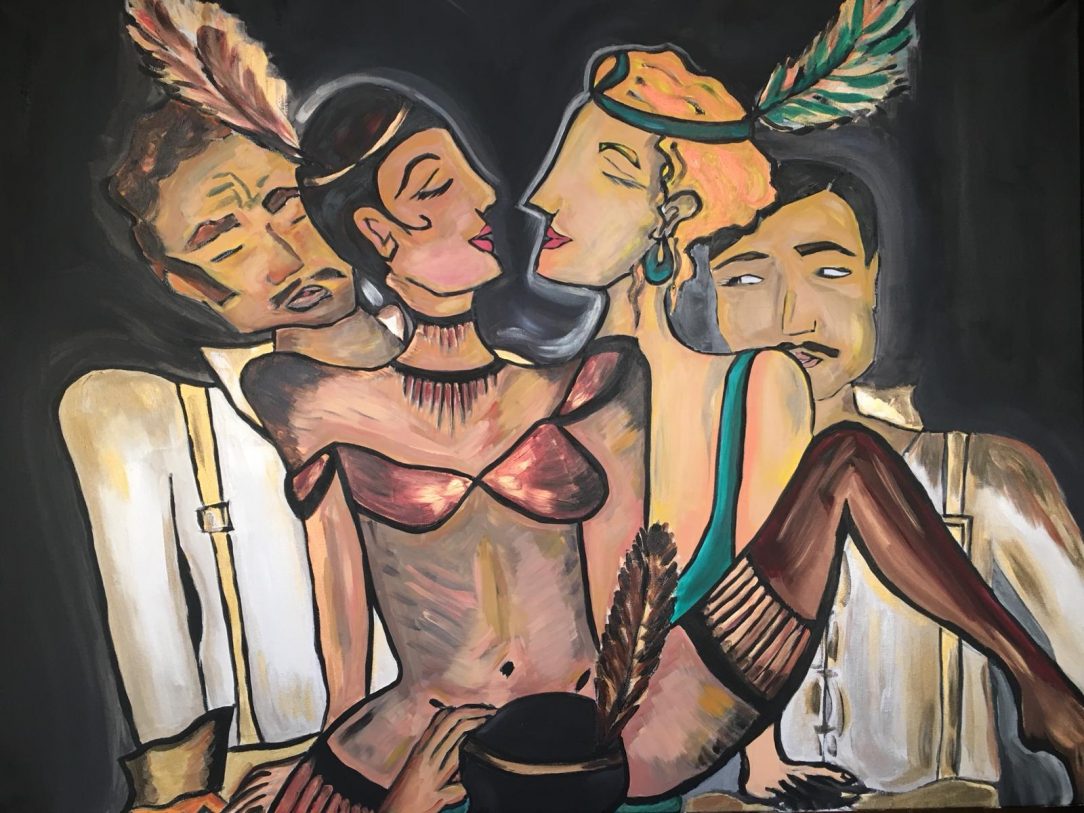 Below, you will find my new art series „Female Warriors of The Golden 1920s“. On Friday, 3rd May 2019, it was presented to the public for the very first time during my exhibition opening at N Galerie! 🙂 You can visit the exhibition until the 22nd of May 2019.

The first four are celebrities of the 1920s who were the sources of my inspiration (therefore you will find the photographs of these icons under the corresponding artwork). The other three are not depicting celebrities, but are rather capturing a certain idea.

Every piece is single item, a unique work of art. If interested in purchasing the original or a print, message me 🙂

„Before Marlene, there was Anita“

I have always been fascinated by the Golden 1920s – who isn’t? But while we nowadays love to remember the glamour of those days by throwing Great Gatsby Parties, it was actually a decade of contradictions.

Yes there was glamour and decadence, new wealth coming from industrialization and people storming cities instead of staying in villages. Yes, there was a revolution in fashion, design and art. Yes there was the movement for women’s rights and for more democracy in general. And yes, the 1920s were about exploring individual freedom in life and sexuality.

But all this was set between two devastating world wars, a decade of light and progress, surrounded by utter darkness, often this light and darkness getting mixed up. The glamour we so often associate with the Golden 1920s was often a mass escape from bitter reality. Yesterday taught them that they should live the moment to the fullest and don’t think about the future. This sentiment is captured in „Nostalgia“.

In my artwork, I try to portray the contradictions of the 1920s – this is what „Foreplay“ is all about. Young women and men enjoying and exploring themselves, yet surounded by darkness symbolizing the tragedies they lived in/ being embedded in two world wars. It is also a painting about the growing emancipation of women after the end of World War I, when  the got voting rights, found jobs, started exploring themselves and developing life ideas of their own – a new and confusing situation for the men who feel lost after returned from war and finding everything so changed.

The painting „obedience“ depicts the mixed feelings many women had at the intersection between remaining what was considered appropriate and testing their boundaries.

Anita Berber is a main hero of two of my artworks. She was an absolute icon of 1920s Berlin, famous for both her performances on stage and her turbulent life off stage. Ironically, she died at the age of 29, maybe because her inner self was not ready to live in any other setting but the Golden 1920s. She unites so many things that are symbols of the 1920s: mania and depression, glitter, tons of cocaine, alcohol, excessive love life, deep performances, meaningful art, sex, emptiness and depth, both empowerment and degradation. She was famous for sometimes throwing champagne bottles at her audience while performing – as depicted in my painting 🙂 Also she was the first women to wear a smoking on stage. We usually believe it was Marlene Dietrich, but Marlene actually copied Anita – I wanted to capture this special moment on canvas.

Another icon that served as a great source of inspiration is the actress Louise Brooks – depicted in „What time is it? / The Vamp“ She was a sex symbol and flapper icon of the 1920s who played a significant role at making the bob fashionable. Her movies were considered „adult“ at that time. Also her acting style was new and back then shocking. People were used to actors in movies acting the same way as actors on stage, while Brooks used a realistic acting style – which is still the standard today but was groundbreaking in the 1920s.

Another icon of the 1920s portrayed in my paintings is the exotic American-French dancer Josephine Baker, who wowed Berlin in the late 1920s with her expressive, sensual and avantgarde performances as well as her luxurious lifestyle, just a few years before Hitler’s rise to power.

I hope you enjoy my artwork  and look forward to your opinion:) I am curious, what do you think about the 1920s – Golden age or overrated?